Arrow and Indiegogo team up to help entrepreneurs 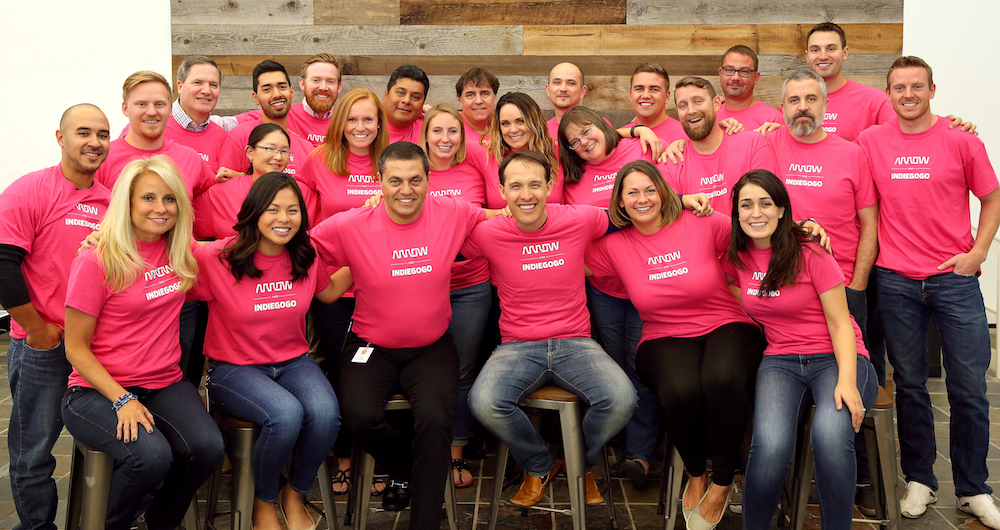 With a new partnership, one of Colorado’s largest tech companies hopes they’ll be able to help some of Colorado — and the world’s — smallest ones.

Here’s how it works: An inventor, entrepreneur or company will create a crowdfunding campaign on Indiegogo. They then have the option to apply to become “Arrow Certified,” where Arrow’s engineering, IoT and development experts will look at the campaign and evaluate it based on whether it has a viable path to market, is capable of getting manufactured and how challenging all of that might be.

Campaigns that pass the team’s test then get a badge on their profiles indicating they’ve been certified by Arrow — a feature the company hopes will demonstrate to investors that the product has a viable chance, helping them raise more capital.

All companies that get certified receive other benefits from Arrow as well, including access to their online prototyping tools, technology reviews from the company’s experts, marketing and promotional support, discounts on Arrow products and up to $1,000 in material support.

Campaigns that stand out as exceptional go one step further — Arrow awards an “Arrow Innovator” badge, which demonstrates the project’s unique capabilities.

In addition to earning the benefits from certification, innovators also receive $10,000 in material support, supply chain services support and a fast-tracked review with the company’s in-house financing team.

As an extra incentive, Arrow is offering $1 million in flash funding over the course of a year. Everyone who applies for certification is eligible to receive a share of that $1 million — they just awarded $25,000 to their first recipient.

All of this sounds like a pretty big investment on Arrow’s part, but it relates directly to their mission of driving innovation forward.

“Corporate R&D labs are a thing of the past,” said Arrow’s PR & Media Relations Manager, Meghan Macdonald. “Now it’s a hacker working in her garage or an accelerator space. Arrow recognized that and said, ‘How do we tap into this new state of innovation?’”

Arrow’s size, reach and expertise as a global company also inform a key motivating factor for the team: helping startups focus on more than just financing.

“The common narrative around startups is about financing,” said Macdonald. “And certainly, financing and the associated challenges can trip up a lot of startups. But what folks never really focus on is getting support for the supply chain challenges they might face — whether you’re actually going to be able to build once you’ve got the financing in place.”

The partnership makes perfect sense, then — Indiegogo focuses on financing, leaving Arrow more room to tackle supply chain and manufacturing issues that might come up for inventors and entrepreneurs with campaigns on the site.

“Arrow is leading IoT design and production for many of the world’s largest companies,” said Matt Anderson, Arrow’s Chief Digital Officer. “We are broadening these capabilities to support the rising wave of innovation coming from crowdfunding. The comprehensive design, manufacturing and go-to-market support that Arrow will provide Indiegogo campaigns will help IoT and technology innovators succeed in even greater numbers, making Indiegogo the only game in town when it comes to launching an IoT or technology idea.”

The partnership itself was spearheaded by Anderson and Indiegogo’s CEO, David Mandlebrot. They’d been talking about how it would work for nearly eight months before it finally came together this spring. Teams from both companies came together to iron out the details, and it officially launched at the end of August.

“There are a number of crowdfunding sites out there designed to help entrepreneurs along the challenging path to market,” said Macdonald. “Indiegogo partners with large companies that can bring more than money to the table. Instead of an afterthought, we’re putting it up front. It’s a smarter way to go to market. We can offer alternative suppliers and help them work through challenges.”

Ultimately, the team hopes this partnership will help boost innovation in the U.S. and around the world by supporting inventors and entrepreneurs and helping them get off the ground. And, Macdonald said, it doesn’t hurt that many of the companies they end up certifying might end up wanting to work with Arrow in the long term.

“One of the coolest things about this is that it’s unexpected,” she said. “If you ask people who Arrow is and what we do, they still wouldn’t know. Innovative and unexpected partnerships like this are helping to expose us to a whole new crowd of innovators. It’s been motivational for employees and executives throughout the company. We’re cool! Folks might think of us as this 80-year-old company but we’re doing really interesting and out of the box things.”