Behind the scenes: what it’s really like to be a developer for ThoughtWorks 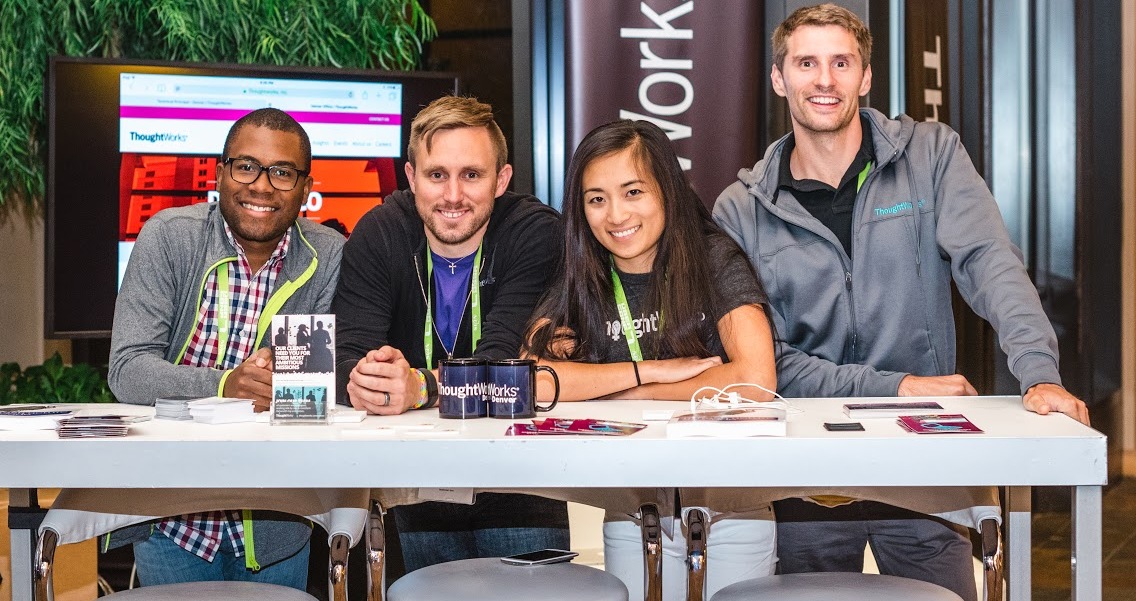 When applying for a job, it’s hard to tell what life would be like at that company. Sure, the job description says what you’ll be doing, and maybe it’ll have a bit of info about the company and its culture.

But what’s it really like to work there? In the case of ThoughtWorks, life as a developer is pretty different than the standard developer job. ThoughtWorks partners with clients around the world to build stellar software — and a key pillar of their company is working toward social and economic justice.

Senior Software Developers Patrick McFadden and Derek Johnston joined the ThoughtWorks team in 2010. Called Consultants in ThoughtWorks’ language, they were both recruited by friends who already worked at ThoughtWorks. McFadden didn’t have much development experience before starting — he learned in the process after joining the team. Johnston studied mechanical engineering in college. After a brief stint in product design, he joined ThoughtWorks and learned to code through an associate consultant program, where he spent time in India working on mock projects with other students.

While they’re now based in Denver, throughout their time at ThoughtWorks, both McFadden and Johnston have traveled around the country and across the world, sometimes on a weekly basis. The job isn’t one size fits all, though — each ThoughtWorker’s trajectory (and travel) is different from everyone else’s. 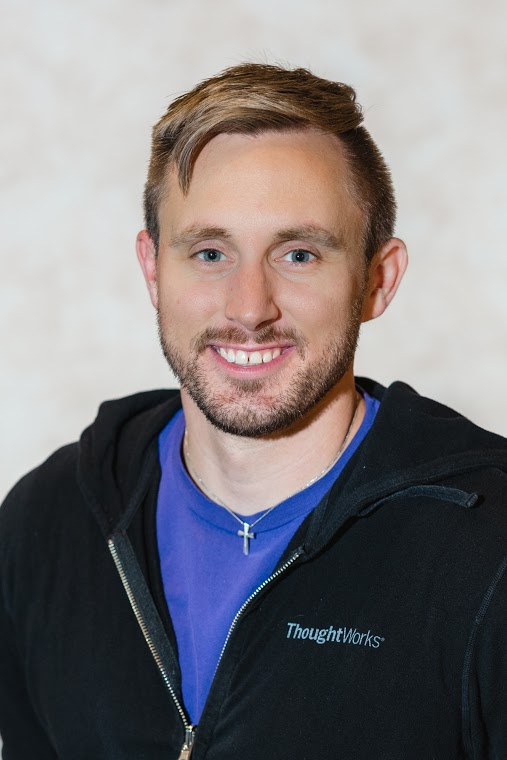 McFadden (pictured left) travels frequently, going to Houston on Sundays and returning to Denver on Thursdays each week.

When he’s at the client site in Texas, McFadden said he’s almost exclusively pairing with the client’s developers. “We have some of our standard ritual meetings around standups, story kickoffs and story signoffs,” he said. “We do a lot of story work.”

McFadden is also a tech lead coach, where he has one-on-ones with the client to review the team and their code.

On Fridays, McFadden works in Denver at Galvanize’s Platte campus. He said he spends less time on client work and more on interviewing candidates, performing code reviews and setting up meetings with his mentors — and his mentees. 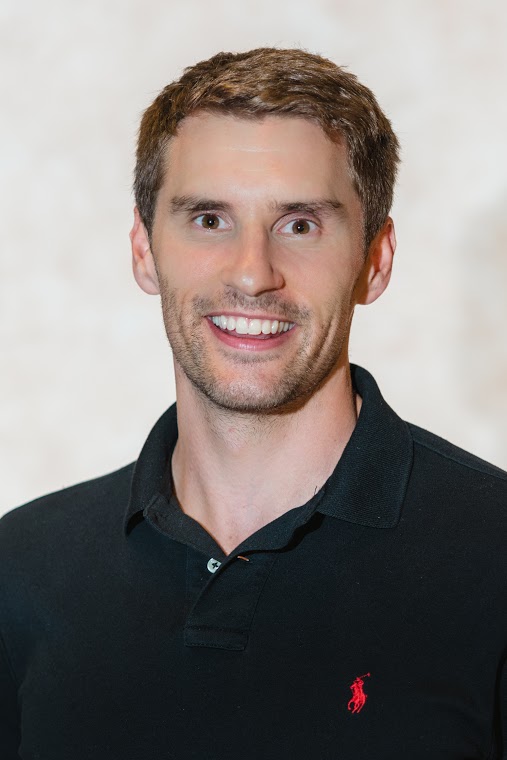 Johnston (pictured right) doesn’t travel all the time, but occasionally he’ll go to Wilmington, Delaware to work with his client. Whether in Denver or in Delaware, Johnston is working for a large bank coming out with a new product who sought their expertise.

Johnston said they will launch in a month, so he spends a lot of time running tech analyses, making sure environments are up and integrations are okay. He spends at least half the day pairing with other developers on the team, writing code and making sure everything’s going along smoothly.

For Johnston, an exciting part of the week is their team showcase, where senior level people — including the CEO sometimes — come in to see the status of product.

While some people travel more than others, it’s still an important part of being a Thoughtworker — so people filled with wanderlust have a higher chance of thriving.

“You do have to agree to travel a higher percentage of the time when you join,” said Johnston.

McFadden said project and travel lengths vary — one of his was a month, and another lasted two and a half years. Throughout the last six years, ThoughtWorks has sent him to Minneapolis, Dallas, Houston, Fort Collins, Chicago, Atlanta and even five months in Brazil — among other locations.

In general, Johnston doesn’t travel as much as McFadden. Before he came to Denver, Johnston lived in Chicago and worked on multiple local projects there. “They do care about you, so when I wanted to stay local for a bit I got to be local,” he said.

Johnston added ThoughtWorkers are allowed to put in requests to travel. Once, when he was working out of Calgary in Canada, Johnston flew a few friends out to join him, and they went skiing in Banff. He was even able to live in Glasgow and Istanbul with his wife after requesting to spend some time in Europe.

McFadden said he usually goes climbing or running after work, or there’s usually some sort of team outing happening.

While Johnston is traveling, he has a fairly typical after-work schedule filled with activities he often does with coworkers.

“Everybody’s very energetic and they always want to do things,” he said. “Mondays I’ll go for a run and then grab dinner or drinks with a coworker. Tuesdays I go out with a group that goes rock climbing. Wednesdays a group of us volunteers with Zipcode — an organization that helps other people learn to program. That’s pretty typical for other projects, too — there’s always some sort of charity you can get involved in.”

When asked what his favorite part of the job was, McFadden said, “The standard answer a lot of people give — because they truly believe it — is that ThoughtWorkers are really awesome. They’re crazy smart people with lots of opinions who want to hear yours and debate on your opinions. It’s a really fun and interesting way to find out whether your opinions are holding water.”

He also likes the company as a whole — even with a large global presence, a lot of aspects make it feel like a small company. He knows and cares about a lot of people on the team, and he feels like they care about him even outside of work.

Johnston said he likes the variety his job offers him, since he comes in to new clients every three to 12 months. A natural problem solver, he enjoys having a new domain, helping a client with an issue they’re having trouble solving themselves.

“When you get to solve this problem, you get to solve it with people who are also interested in it,” he said. “I look at other devs that are doing the same project for two to three years and I feel like with the consultant side, everything is accelerated. You have so many more experiences under your belt in a short amount of time.”

Like with every job, being a ThoughtWorker comes with its own set of challenges.

Due to the travel and amount of time spent interacting with clients, McFadden said the role’s really not conducive to introverts, but they’re getting better at recognizing that and giving people a break and time to recharge.

For Johnston, the consulting part of the job can be tough.

“Sometimes you have to tell the client what they’re working on isn’t the best thing,” he said. “Their idea might not be the best solution to the problem. You have to demonstrate why you think there’s a better solution out there, but it’s challenge and opportunity to practice your consulting skills.”

But regardless of the challenges, life as a ThoughtWorker has been transformative for McFadden and Johnston.

“I appreciate that they took a chance on me in the beginning, Johnston said. “I knew close to nothing about software development, and now I feel confident enough to lead a team.”